This article focuses on the Automobile Industry in India. India is the fourth largest automobile market with sales rising to 3.99 million units with an average growth rate of 8.3% yearly. India is the seventh biggest commercial vehicle producer.

The segment of Two Wheelers dominates the market in volume, due to the growing middle class and a young population. In addition, the company’s increasing interest in developing rural markets further aided the sector’s growth.

India is also a prominent automobile exporter, with high hopes for export development in the near future. During FY19, automotive exports grew 14.50 percent. It is projected to rise during 2016-2026 at a CAGR of 3.05 percent. However, multiple initiatives by India’s government and the major players in the automobile sector in India are projected to make India a global leader in the two-wheeler and four-wheeler industry by the end of the year 2020.

Key Facts of the Automobile Industry in India 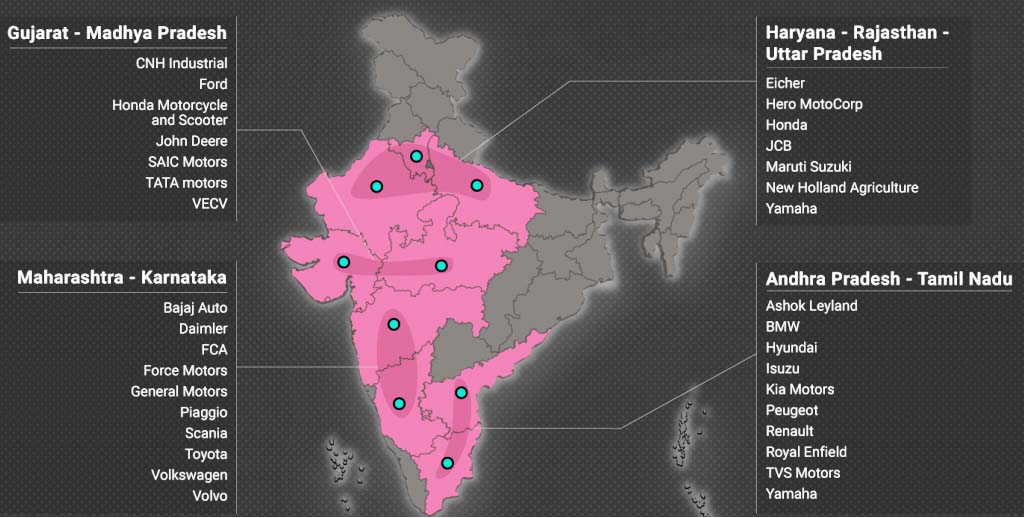 Market Size of the Automobile Industry in India

Exports of the Automobile Industry in India

According to The New York Times, India’s large technical base and experience in the manufacture of low-cost, fuel-efficient cars has resulted in the extension of manufacturing facilities to many automobile companies such as Hyundai, Nissan, Toyota, Volkswagen, and Maruti Suzuki.

India has been a leading hub in the manufacture of small cars in recent years. Hyundai, the country’s main exporter, ships more than 250,000 cars annually from India. Besides the shipments of Maruti Exports to Suzuki’s other markets, Maruti Suzuki also produces small cars for Nissan, which sells them in Europe. Nissan will also be manufacturing small cars from its latest Indian assembly line. Tata Motors is selling its commercial vehicles to the Asian and African markets and is planning to sell hybrid cars in Europe. Bajaj Auto is developing a low-cost car for Renault Nissan Automotive India to sell the vehicle worldwide. Renault Nissan could also follow Ashok Leyland, a domestic producer of commercial vehicles, in another small car project. Although the potential for the Indian automotive industry is amazing, there are obstacles that may stand in the way of future development. As the demand for cars in recent years is closely related to global economic development and increasing personal incomes, manufacturing growth would decline if the economy is weakened.

Production of the Automobile Industry in India

In April-March 2019, the industry produced a total of 30.915.420 vehicles including passenger cars, commercial vehicles, three-wheelers, two-wheelers, and a quadricycle compared to 29.094.447 in April-March 2018, showing a 6.26 percent raise over the same period last year.

Domestic Market Share in Automobile Industry in India for 2018-2019 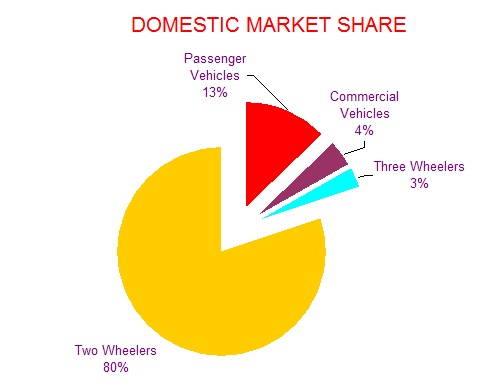 Overall automobile exports increased by 14.50 percent in April-March 2019. Although exports of passenger vehicles decreased by 9.64 percent, in April-March 2019, Commercial Vehicles, Three Wheelers, and Two Wheelers reported growth of 3.17 percent, 49.00 percent, and 16.55 percent respectively over the same period in the year 2018.

Investments in Automobile Industry in India

Many car makers have started spending aggressively in different segments of the market to keep up with the increasing demand. According to data published by the Department for the Promotion of Industry and Internal Trade (DPIIT), the sector has drawn Foreign Direct Investment (FDI) worth US$ 22.35 billion over the period April 2000 to June 2019.

Some of the recent/planned investments and developments in the automobile sector in India are as follows:

India’s government is encouraging foreign investment in the automotive industry and allowing 100 percent FDI under the automatic route.

Some of the Government of India’s latest initiatives are :

Following are the achievements of the government in the past four years:

The automobile industry is supported by various factors such as availability of skilled labor at low cost, robust R&D centers and low-cost steel production. The industry also provides great opportunities for investment and direct and indirect employment to skilled and unskilled labor.