Defining a grievance is very difficult. However, personnel experts have tried to differentiate between dissatisfaction, complaint, and grievance. In general, dissatisfaction in any form declared orally between employees is known as a complaint. A grievance is often related to work and is reported to the management’s attention. Often this meaning is changed to include the fact that a complaint should be in writing and not orally communicated. 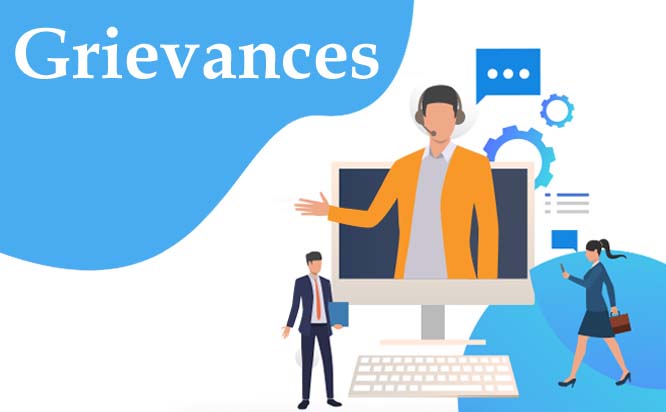 In a broader sense, some organizations understand the word grievance; they insist that a complaint should be processed through normal channels of the grievance procedure. Consequently, the term grievance has been described differently by various authorities and authors. For example, Dale Yoder defines it as “a written complaint lodged by an employee and alleging unfair treatment.” And Keith Davis defines it as “any actual or perceived feeling of personal injustice that an employee has in relation to his employment relationship.”

According to Jucius, “a grievance is any dissatisfaction expressed or not, valid or not valid, arising from anything related to the organization that an employee believes or even feels unfair.” Pigors and Myers identified that terms – dissatisfaction, grievance, and complaint – clearly indicate the type and level of dissatisfaction. Dissatisfaction is, they say, anything that disturbs an employee, whether he expresses it in words or not. A complaint is a spoken or written dissatisfaction that is brought to the attention of representatives of the management or the trade union.

A grievance is simply a complaint that can be ignored, over-ridden or, dismissed without consideration; and the employee feels an injustice has been done, especially when the complaint was submitted in writing to a manager or to a trade union official. Beach has described a grievance as “any frustration or injustice feeling related to work and is brought for attention of management.” Often a grievance is characterized as “Anything an employee thinks or feels wrong and is typically followed by an aggressively disturbing feeling.” It (grievance) is usually more formal than a complaint in character.

It can be valid and must grow out of something connected with the operations or policies of companies. This may have an explanation or modification of the labor contract provisions. According to International Labor Organization (ILO) grievance is “a complaint by one or more workers regarding wages, allowances, working conditions and the interpretation of service-related issues, covering areas such as overtime, transfer, leave, promotion, job assignment, seniority, and termination of service.”

On an analysis of these different definitions, it may be noted that “Grievance” is a word that covers dissatisfaction and has one or more characteristics as follows:

Grievances typically give rise to unhappiness, anger, disappointment, job indifference, poor morale; and eventually contribute to worker inefficiency and low productivity. Therefore, a personal administrator will see to it that complaints are remedied as soon as possible, dropping which can shake the entire edifice of the organization. He needs to learn and understand the reasons behind complaints, and how they can be addressed. He will assist the foreman and boss as well as other line staff members in ensuring they resolve disputes properly.

When a grievance is brought to an employer’s attention, the employer usually has a formal means to address the employee ‘s concerns and attempt to reach a resolution. Usually called this formal means the grievance procedure. The collective bargaining arrangement in effect for unionized workers usually includes a specification of how disputes, such as the use of arbitration or mediation, should be treated. Many non-union employers often have structured processes for managing complaints and grievances from workers. The grievance procedure that is in place may be unique to the organization, but often a series of steps will be followed to try to get resolution.

For example, many grievance procedures begin by identifying where the grievance of the employee has to be started, such as with the direct supervisor of the employee, who must then meet with the union rep to decide whether the grievance is legitimate (i.e., they determine whether the provisions of the collective bargaining agreement are being breached or misapplied). Of course, this is just an example, but it’s often how grievance proceedings begin; it could be different in your workplace. In our example, they may take steps to resolve it after the supervisor and the union representative meet and agree that the grievance is valid. Even after that, the employee remains dissatisfied things might need to be escalated.

Recommended
Need of Grievance Procedure
Without an analysis of their nature and pattern, the causes…